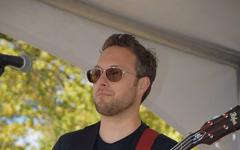 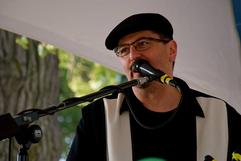 Mike has been inspired by and involved with popular music nearly his entire life. One of his earliest recollections is that of his parents buying and playing "Meet The Beatles" shortly after their appearance on The Ed Sullivan show. A self taught musician, by the age of ten he was plucking out on the piano hits of the day which were being played on WIXY 1260 AM. Fast forward to mullets and Molly Hatchet. By the time he reached his early twenties, Michael had developed his keyboard, lead vocal and song writing skills and brought them to bear as a co-founder of the Cleveland based original band Serious Nature. The band's modest local following resulted in the release and air play on 92 FM of their first single, Res-Q Me in the spring of 1987. The follow up release in the summer of 1989 of their CD titled Glacial Groove and the single Bombs Away were debuted by none other than Kid Leo on 100.7 WMMS FM. The band also enjoyed live success headlining several New Years Eve events on the square in downtown Cleveland as well as opening for national acts like Rare Earth and Was Not Was. He has returned to his earliest musical influence and is most thrilled to be a slice of Revolution Pie while covering one of music's most influential bands, The Beatles. Mike is married to Kelly and has two grown children.

Jim grew up surrounded by music in his hometown near Canton, Ohio. The formal music training came in the family station wagon on family trips where his six brothers and sisters would harmonize to the songs on the radio. The local radio station that played those oldies gave the family lots of practice learning the hits of the 50's and 60's and Jim trained his ear to those early hits including The Beatles. Later Jim would pick up the guitar at the age of 14 which his brother brought home from serving in the military. The first song Jim learned on the guitar was "I Saw Her Standing There" by The Beatles. Jim would later go on to work for that same local radio station, 1480 WHBC - AM and learn more about the songs he used to harmonize and play guitar to. The twists and turns of life directed all of that musical training into a call to the ministry where Jim has served as musical director and worship leader at Christ Community Chapel in Hudson, Ohio since 2005. Jim is married to Erin and has three young children.

Recreating The Sound of The Beatles 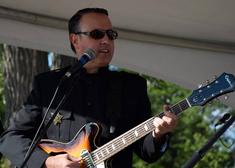 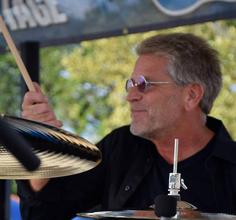 ​​Peter is a Cleveland native and an accomplished drummer and percussionist who has played drums for over 50 years. He studied percussion for 13 years with Jerry Bruno, Harry Damis and Robert Anzalone. Peter has attended numerous clinics hosted by Louie Bellson, Buddy Rich and Terry Bozzio. Raised on The Beatles, Jimi Hendrix, Led Zeppelin, Genesis, Yes and ELP. He musically admires Carl Palmer, Neil Pert, Bill Bruford , Chester Thompson and Terry Bozzio. Peter has attended hundreds of music concerts over the last 40 years and is the only member of Revolution Pie to actually see The Beatles live in concert at their final tour, August 14, 1966 at the Cleveland Municipal Stadium. Peter is married and has two grown children.

Paul Fresty has been playing guitar since he was 10 years old. Initially attracted to the explosions, bright lights and smoking guitars of Kiss (like most 10 year olds), he would frequently turn his basement into a Kiss stage and jump around with various tennis racquets while lighting smoke bombs...indoors. Eventually he started to realize that the music he was listening to was inﬂ uenced and affected by the music that came before it. Working backwards, he discovered among many others, The Rolling Stones, The Who, and of course, The Beatles.  Paul joined his ﬁrst band at age 12 he and three other friends from grade school tormented eardrums in Cleveland suburbs for years. He currently plays with the SAME three guys in a band called Echo Grove. Their relationship spans more than 25 years of music. All of what he knows (musically or otherwise), he can attribute to that experience. Paul is endorsed by, and exclusively uses, Steve Clayton custom guitar picks! He loves them for the unmatched quality, reliability and their unique ability to make him play better than he really can. 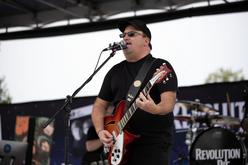 Ralph is an accomplished singer, songwriter and guitarist. He has played guitar for over 40 years. He grew up in a musical family where his Dad and Mom both sang professionally in the late 1950's in a vocal group called "The Cashmere's".  Music was played in their home all the time and his earliest memories are listening to singers gathering around the kitchen table practicing harmonies of the hits of the 1950's and 1960's.  By the time Ralph reached his teens, The Beatles were his favorite band. Collecting every album, he poured over every song in their historic catalogue, strummed the guitar along with the records, studied the lyrics and tried to harmonize with both John and Paul on the record player. In 2002, while attending a Paul McCartney concert at Gund Arena in Cleveland, he had the great idea to start a "Beatles Band". Revolution Pie has become one of the most fun and rewarding projects of his life and has brought much joy to many people. Ralph has also co-written over 60 songs, executive produced four records that have sold 10,000 units and toured extensively with another music project called Res-Q that ran from 1984 to 2006. Ralph is married to Maria and has three grown children.

Chris is a Cleveland native and grew up listening to everything his parents listened to including The Beatles and Beach Boys. He first started playing saxophone in 5th grade and then went on to play in junior and high school bands. He is self taught on guitar, piano, bass and drums. Chris has been part of musical projects with Connor O'Brien and bands Second Shade, GreenScreen and Mabry. Chris has been in Revolution Pie since it's inception in 2002. He met his wife Sarah because of their love of The Beatles. He has three children, Mia McCartney, Julian Ronald and Luke Lennon. He's currently writing and recording original music. When not listening to The Beatles, he'll deep dive into music of The Beach Boys, Billy Joel, Jellyfish, Rooney, Ben Folds Five, Barenaked Ladies and The Explorers Club.